No matter how hard I try to not talk about myself, sometimes other people force my hand. So here we go again.

During the Valentine’s Day weekend of 2016, my apartment was flooded. My  apartment was and is managed by Aizer Realty, specifically by Joseph Aizer. I am making this information public because I have just found out today that Joseph Aizer and 147 Hamilton LLC have taken me to small claims court for unpaid rent, and at this point, there is no reason to be quiet. 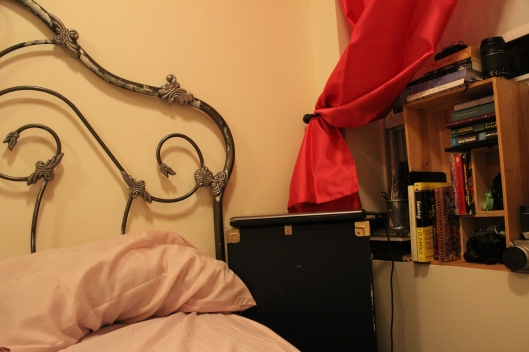 On the surface, my apartment was perfect. It had a washer/dryer unit, hardwood floors, dishwasher and a backyard.

And it was home. The only problem was that during the cold months, the apartment was nearly uninhabitable.

We had central air, but it was so expensive to run, between $1200-$1500 monthly during the cold months. We had been in long tern talks with Joseph Aizer about the fact that the apartment was so cold, even despite the HVAC system, and we desperately needed an alternative. I insulated the windows, my roommate cooked frequently to keep the apartment warm, but during those cold months, the electric bill was so high that we were going broke.

That first summer, my roommate and I made the decision to have the central air system shut down from the unit, to lower costs. During the warmer months, the  difference was significant. The electric bill went down to an average of $100-$200 a month. During the winter months we resolved to use space heaters instead, which lowered our bills to about $900-$1200, better, but still leaving us looking for alternatives.

My room specifically was known as the freezer. With three of the four walls facing the garden, my room was often colder than the outside. I mentioned repeatedly that my room seemed badly insulated, something Mr. Aizer scoffed at. But I could feel the cold coming in through my feet, and I never went without socks between September and May.

Sometimes, I had to leave the space heater on in my bedroom all day to get it warm enough in time for bed, and while it was hard on the wallet, it made it easier to sleep.

That Valentine’s Day weekend, I spent it with friends. when I came back that Monday night, I started to warm up the apartment before bed, per usual. What I didn’t know is that the sprinkler pipes in my room froze, and when I came back and warmed up the apartment, they burst. I was able to catch the very moment it all went from a drip to a complete flood.

Within minutes, I lost 300 books. I tried to protect what I could, but the water just kept going and going, and even though I tried going to the basement and shut the water off with one of his men on the phone, I could not figure out what to do.

I spent the next hour knee deep in water, on the phone with  my roommate, with Joe and his flunkies, waiting for someone to show up. One of his men, Ezra, tried to make me take the blame for the pipes freezing, telling me I should have never turned off the heat when I left. I kept reminding him, no matter how hard he tried to pin the blame on me, that keeping the pipes clear was not part of my skill set or my job.

When Mike arrived an hour later, I was standing right next to him when he informed Erza and Joe over the phone that there was no way I could have anticipated this, and that it was unreasonable for them to expect me to be the one to shut the water off, something that I do not know how to do and had never done before, and something that was their job.

They offered to put me up in a hotel but I refused, too afraid to leave everything to rot overnight. Instead, I didn’t sleep. I cleaned until dawn. I washed the clothes that had gotten wet. I mopped the floors with towels and dumped water in the sink. I tried to save some of my books, mostly journals and signed copies, but the majority were lost. 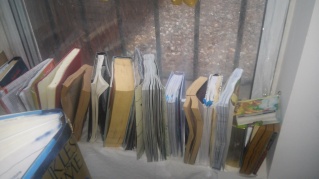 The next morning when Joseph’s help came, I had done most of the work. I tried to sleep while they cleaned up the rest, dumped my mattress (not covering it according to NY code) and ripped up the carpet. I was livid because just like i had suspected, the carpet had been glued directly onto the floor, proving that my room was badly insulated like I’d told them.

In person, Joseph was super apologetic. we agreed to two things in person: that my roommate and I were going to break that lease, and that Joe would help me find another place to live.

Over email or over the phone, Joseph was different. He continued to blame me for the flood because I didn’t leave the heat on while I was away, despite what Mike had said, and denied any fault because I didn’t have any renter’s insurance. He got convenient amnesia. He admitted to nothing, kept saying he was going to reach out to the owners for us but never did, and kept jumping off conversation threads and creating new ones, I’m sure to keep us off balance.

He made some attempts to find me another place, but left it to me to contact the brokers. No one responded after I disclosed that I was out of a home because the sprinkler system in my apartment burst, and Joe stopped bothering. For a split-second, I considered staying in the apartment, but he took this as an opportunity to keep my roommate’s deposit (money that did not belong to me and that I  did not have) instead for allowing for a break to fix up the apartment and give me time to get a deposit, a new roommate, and enter into a new lease with him.

I  moved out on March 1st and Joe’s people were in the apartment hours later, with our written permission. Two weeks later, I saw my apartment listed on streeteasy.com for $3,000 a month.

Two weeks after that, the apartment was taken off the market, meaning that within a month and a half, Joseph had re-rented the apartment, upped the rent, and collected a fee. Meaning that due to his negligence, he poised himself to make even more money.

I have fought the urge to contact the current tenants and warn them about what we went through in that apartment. The idea that space is limited in the city is a myth, but the predatory nature of the real estate system is very real. It was in Joe’s financial interest to be negligible about that apartment. It has been in mine to keep quiet, for fear of being put on a blacklist. But to believe that I  should keep quiet after Joseph Aizer has had the nerve to take me me to small claims court for an apartment he was slow in maintaining is absurd. If he had been as diligent about maintaining the property as he is about trying gain financially, we would not  be in this situation. Specifically, I would not be out of a home.

I did not want to leave my apartment. Financially, I had no choice. Joe gained more by my departure. This behavior is not only predatory, it is unethical, and New Yorkers are constantly being pushed out of their homes because of people looking out for the bottom line. I will not be silent about that any longer.

Here’s video I took as I stood in the dark waiting for someone to show. I shut off the circut breakers to keep from getting electrocuted.

A picture of the pipes that could have helped me but were chained:

And more of the aftermath. 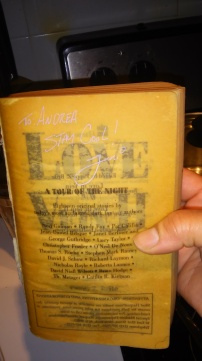 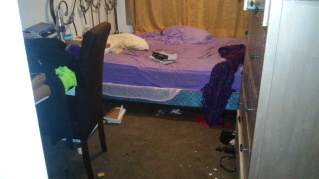 1 thought on “That Whole Thing About My Old Apartment”